This week I have brought my books to work and I actually did study a little while commuting.

Sogang Korean:
I have revised a bit and this week I will move on to new chapters.
It appears I have been using much of the grammar already after my language partners have introduced me to it (that would explain how I got that level 2 in TOPIK), but now it comes in book-form.

TTMIK:
Looked over some previously completed lessons to revise since I have not been a good student while working lately.

Writing:
Started out on two small essays, but they are still in progress.

On Friday we had family visit from abroad. For the first time in 20-something years. My cousin is in town with her fiancé and naturally we invited them for dinner as soon as we heard they would be coming to Denmark. I think I have met her only once before, but I was too small to remember so effectively this was the first time we met “properly”.

Fun facts:
– She looks a lot like me. Well, we’re related, but still.
– She wears almost the same type of glasses that I do when she’s not wearing contacts.
– Her earrings were almost identical to mine. Exact same shape, but different colour and mine are made to hang while hers are made like studs. And no they are not typical.
– We used to do the same sport although I went to competitive levels.
– She studied law too, but we have different specialisations.
– After dessert we did a synchrone jump-and-run from the garden table when a rather large spider decided to join the party.
– She hates spiders but doesn’t mind snakes, like me. And like me she once had a picture taken with a big snake to prove it.
– Her fiancé used to teach English in a 학원 in 서울 so they regularly go out for Korean dinner, and we could talk about Korea!

What are the odds?!!

Why buy this book?
Proverbs are important in a language, and they help one understand the people who use them. Learning a language without ever learning any of the proverbs associated with it makes for a language learner who may know the words used, but not the meaning behind them in the given context.

I remember when learning Italian, we also had to look at proverbs. One day we were asked to go home and find some Italian proverbs and sayings as preparation for a class. One that I found roughly went “if you steal a little you go to jail, if you steal a lot you have a career”. I cannot vouch for the authenticity of this saying, but judging by Italian politics there might be an element of truth to it and to this day I still remember it!

Target audience:
First and foremost Korean children – since it is a children’s book. The book contains 100 stories, each explaining the meaning of a proverb through a story.
This set up means that language learners improve vocabulary as well as learn the proverbs. 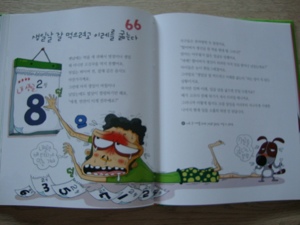 The odd observations
It seems that a lot of the characters in the stories are either angry, afraid, or stressed out if judging by the illustrations.
I guess I will know if that holds true once I make it through the book.

Being an illustrated childrens’ book, you will also learn about Korean sounds through the “captions” accompagnying the individual cartoons. There are speech bubles as well as outbursts and sounds such as the sound it makes if somebody hits his/her head against something.

Today I stumbled across the following search term in the overview of what people searched for to get to this blog: “rude koreans blog”. I wonder if such a blog actully exists…

I guess someone met a Korean who made a lasting impression! 😀

Hopefully it didn’t scar that person for life, but apparently enough to search online for others with similar experiences.

What have I been doing lately? Diligently studying Korean? Well, at least I have been diligent when it comes to carrying around my Korean books. Seriously, I’ve brought them everywhere in the hope of having a moment to sneak them out of my bag. I hope that a bit of knowledge has magically been drifting from my bag to my brain… well, that’s not likely, but a girl can hope!

I suppose you deserve a bit of an explanation for why I suddenly went so silent when I used to be a very avid blogger.

As you might have realised, I have been working like a mad person lately. I’m on a time-limited contract and since I don’t know if I’ll be extended or not (and I’m off from uni due to holidays), I’ve been trying to make the most of my time and my contract by working a lot. Mildly put, I’m “uncomfortable” with uncertainty when it comes to such important things. While I like “new challenges” and alternating assignments and whatever it’s called in HR-speech these days, I really dislike not knowing if I ought to be writing applications for another company already.

Working nights is dreadful for the body. Even though I’ve been making a point of resting during the day, by the end of my last night shift I was feeling physically sick. Making it home safely through traffic was a downright challenge, and there was no way I could study when I got home. I do not dislike the concept of night work, there is a special atmosphere, however I do not particularly like what it does to you after a while. Yesterday I had a day shift, feeling almost jetlagged since I couldn’t sleep all night (really, all night) after having had so many night shifts, and then tonight and Monday I have two more nights before I’m back on days for good three weeks. Then I have two more night shifts planned and then no more!

All has not been dreadful, though. My sister and her family has got a new puppy after the old dog passed away. She is sooo cute, but being a hunting dog, she is always up for a bit trouble if you don’t channel her energy somewhere useful. So far she only hunts toes, ankles and roses, but that’s more than enough!

Even though I have been away, a few new subscribers have arrived. And you have all checked in regularly anyway. Welcome to the new readers, and thank you all of you for dropping by! I have a few posts waiting and some pictures to organise for my next review. These posts will be published in this upcoming week 🙂

This week I haven’t been awefully active online. In fact even my mum who usually tells me to walk away from the screen and read a book or doing something else ‘useful’ (I suppose no matter how old you are, mothers will tell you that) was worried that I was neglecting the blog.

This past week I have mostly been listening to TTMIK podcasts for my Korean studies. I have been working nights for the past week so I’m spending most of my time off work feeling slightly… groggy, for the lack of a better word. In my wake hours when I’m not working, I really do try to study, though.
Also, I try to phrase things in Korean whenever I’m alone based on real-life conversations that I have had earlier in the day.

I was expecting that I would cope much better with night shifts since I’m very much an evening person and I thought I would be able to read much more, but after spending some 9 hours at work and then another hour commuting, by the time I get home, I feel slightly sick; it’s a strange feeling – like my body ought to wake up because the sun is shining and the birds are chirping, and there are so many things I would like to do with family and friends now that people are awake, but on the other hand I’m exhausted. I suppose that’s the difference between being an evening person and a full-blood night person.

I have another week with night shifts and then I will be adjusting back to regular office hours. Wish me luck with the Korean readings!

Have you guys had student jobs/full time jobs where you worked nights sometimes? How did you manage studies and working nights? Any tips for how to make the most of a “day” in such situations?